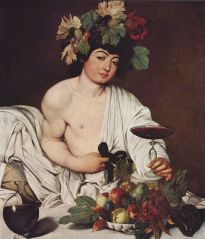 Michelangelo Amerighi or Merisi da Caravaggio was an Italian painter and the maximum exponent of Naturalism, which arose in Italy as an opposition to the Mannerism of the sixteenth century. His career was short and tumultuous and due to his violent and quarrelsome temperament, Caravaggio was always involved in quarrels, challenges and legal...

See everything we offer you!
Caravaggio

Michelangelo Amerighi or Merisi da Caravaggio was an Italian painter and the maximum exponent of Naturalism, which arose in Italy as an opposition to the Mannerism of the sixteenth century. His career was short and tumultuous and due to his violent and quarrelsome temperament, Caravaggio was always involved in quarrels, challenges and legal claims.

Caravaggio was usually described as enigmatic, fascinating, rebellious and dangerous. These adjectives were attributed to him because of his acts. In several times, he was involved in street fights in Rome, he challenged other painters to a duel because of being rivals, he beat art critics up and he even killed once.

He studied with Simona Peterzano in Milan. The luminous experiments in painting from that region (Savoldo, Moretto, the Campi, etc.) and the Lombard tradition, which had a very marked realist inclination, were very decisive to his artistic education.

In 1590 he moved to Rome, where he worked for some time in the Cavalièr d'Arpino’s studio. He showed his profoundly original and innovative genius since his first artworks (Bacchus, Uffizi Gallery, and Boy with a Basket of Fruit, Galleria Borghese) and he managed to get his full maturity in the paintings of San Luigi dei Francesi (last years of the sixteenth century) and Santa Maria del Popolo (1601).

The radical innovation of his pictorial concept caused that some of his most important altar paintings, as in the case of Death of the Virgin (Louvre Museum), were rejected.

In 1606, as a consequence of a brawl in a ball game, Caravaggio killed a man and he had to leave Rome to go to Naples. In Naples, he painted some important artworks as The Seven Works of Mercy, in the church of Pio Monte, and Madonna of the Rosary, in the Kunsthistorisches Museum of Vienna.

Then, he went to Malta, where he painted St. Jerome, Beheading of Saint John the Baptist, (both of them in St. John's Co-Cathedral, Valletta) and Portrait of Alof de Wignacourt and his Page. Later, he moved to Sicily. During that period, he painted Burial of St. Lucy (in the church of St. Lucy, in Syracuse), The Raising of Lazarus (in the Museo Regionale, Messina) and Adoration of the Shepherds (in the Museo Regionale, Messina).

In 1609, he was again in Naples. The malaria caused his death during his way from Naples to Rome. It was close to Porto Ercole, which was one of the Spanish coastal prisons.

Caravaggio reacted against the Mannerist’s conventions which were countered with a natural painting (direct and even brutal and savage) that with its frankness renewed both the profane subjects (The Fortune Teller, Louvre Museum) and the religious ones (The Calling of St. Matthew, in the church of San Luigi dei Francesi, Rome; Salome with the Head of John the Baptist, in the Palacio Real, Madrid). He also gave a modern formulation to the painting of still lives (Basket of Fruits, Pinacoteca Ambrosiana, in Milan).

His use of violent contrasts of lights and shadows, the “winery’s light” and the “darkness” stress the plastic energy and vigour of the forms, which in his works acquire a highest relief because of the energetic foreshortenings and of the asymmetry of his compositions.

The direct or indirect influence of Caravaggio was decisive to the direction that the European painting of the first half of the seventeenth century would take.