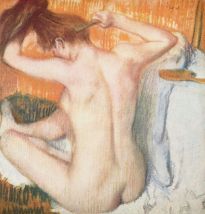 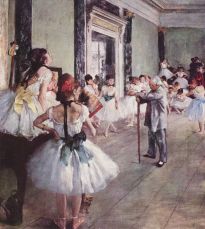 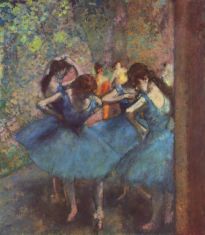 Edgar Germain Hilaire Degas was the complete name of the French painter Edgar Degas. He studied law in Paris, and after that, he was admitted in the École des Beaux-Arts, where he was disciple of Lamothe (1855). Subsequently, the French painter Jean Auguste Dominique Ingres incited him to go to Italy (1856 – 1857), where he copied the Renaissance Great Masters.

See everything we offer you!
Edgar Degas

Edgar Germain Hilaire Degas was the complete name of the French painter Edgar Degas. He studied law in Paris, and after that, he was admitted in the École des Beaux-Arts, where he was disciple of Lamothe (1855). Subsequently, the French painter Jean Auguste Dominique Ingres incited him to go to Italy (1856 – 1857), where he copied the Renaissance Great Masters.

During that period, although his style was maintained along the lines of the traditional and was influenced by Ingres and Puvis de Chavannes, he did not stop showing a noticeable artistic personality that was stated in his artworks Portrait of the Bellelli Family (1860) and Semiramis Building Babylon (1860 – 1865), both of them in the Louvre Museum.

While doing his military service (1870), through Henri Rouart, who was his battery’s captain, he met Manet, Morisot, Mallarme and Valéry. In 1872, he set sail for America, where he painted The New Orleans Cotton Exchange. New Orleans was the home city of his mother. He participated with Cézanne, Pissarro, Sisley and Monet in the first impressionist exhibition in 1874. He sent twenty-four canvases to the second exhibition, and they had a reception by critics and public as unfavourably as his colleague’s (1877 – 1879). Nevertheless, Degas and impressionists’ success and impact would not take place until 1900.

Actually, the only thing Degas had in common with these impressionist artists was the desire of removing the conventionalities painting had during that time. It was because Degas always gave more importance to the drawing than to the colour. He said that the drawing was not the form but the way of seeing this form. From 1880 onwards, he produced a large quantity of portraits and gender scenes as Women Ironing (Louvre Museum), Anger (1872), Interior (The Rape) (1875) and L'absinthe (1877, Louvre Museum).

The ballet and the opera attracted him and he painted some artworks of dancers: Mlle Fiocre in the Ballet "The Source" (1868), The Ballet from 'Robert la Diable' (1872) and The Dance Class (1872); all of them in the Louvre Museum. Horse racing and circus also were causes of inspiration for Degas, as we can see in the artwork Miss La La at the Cirque Fernando. During his last years, he used the pastel, with which he also knew to create masterpieces that nowadays are preserved in the drawing rooms of The Louvre Museum and The National Gallery in London. Almost all of these masterpieces were women’s nudes that were treated with a great liberty of expressive distortion and of composition. Likewise, he modelled admirable sculptures of dancers (Tate Gallery in London and Metropolitan Museum of New York) when his misanthropy and his deteriorated eyes could not tolerate the colour.

As Ingres also did, Degas created by means of lines. Japanese influenced him, and he tended to the establishment of delicate and fine harmonies between the volumes and the colour. He was one of the great innovators in painting of his time and his work had an influence on Toulouse-Lautrec, Bonnard, Vuillard and S. Valadon.