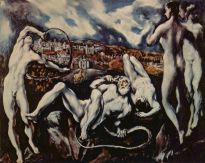 Doménikos Theotokópoulos, who is universally known as El Greco, was an important painter, sculptor and architect of the Spanish Renaissance. He is Greek by birth and he worked mainly in Spain.

There is no known data of his artistic beginning but it is thought that he had to start as painter in some studio from his native country. The only known document that records...

See everything we offer you!
El Greco

Doménikos Theotokópoulos, who is universally known as El Greco, was an important painter, sculptor and architect of the Spanish Renaissance. He is Greek by birth and he worked mainly in Spain.

There is no known data of his artistic beginning but it is thought that he had to start as painter in some studio from his native country. The only known document that records the presence of El Greco in his country dates from 1566. Nevertheless, most of the historians consider that the painter had gone back to Candia occasionally by that year and that his staying in Venice must be place before (towards 1560).

During the 1570s the Venetian painting was at its height. Tiziano was the supreme master even being in his glorious old age. Tintoretto, Jacopo Bassano and Verones together with other younger artists guaranteed the brilliant continuity of the Venetian school. In opposition to the Roman painting, which depended on the influence of Michelangelo and was interested mainly in the lineal and plastic values, the Venetian painters kept as the main characteristic of their paintings the priority and supremacy of the colour, although they also accepted the mannerist interests of Roman origin.

The impact of the Venetian pictorial culture was decisive for the making up of El Greco’s style. It has been stated that he was disciple of Tiziano, but he also studied Tintoretto and Bassano, whose influence was acquired in a very personal way. The beginning of the Venetian period of El Greco has caused the appearance of several theories. Willumsen’s theory of attributing some considered mediocre paintings, which in fact belong to Bassano’s circle, to El Greco has been completely rejected nowadays.

The first undisputed attributions of paintings to El Greco which belong to his Venetian period are St. Francis Receiving the Stigmata, Flight Into Egypt, Christ On The Cross With Landscapes, Christ Driving The Traders From The Temple and The Adoration of the Shepherds. These paintings show a peculiar and singular personality, in which we can recognise his unmistakable freedom of fantasy and his exceptional pictorial talent that would evolve during his subsequent production.

In 1570, El Greco went to Rome. The first document where we find a critical appreciation of his painting is a letter from the miniaturist Giulio Clovio. In this letter, Giulio Clovio already stated that El Greco was an exceptional painter and mentioned a self-portrait which it seems that the Roman painters were amazed at.

His mastery as portrait painter, which reached its peak in Spain, can be observed in some paintings from the 1570s. In Rome, he lived for some time at the Palazzo Farnese and painted for the Cardinal Alessandro Farnese and his librarian Fluvio Orsini. Nevertheless, as it happened in Venice, it seems that he was not commissioned any public work that could spread his fame.

The artworks that have been attributed to his Roman period show a combination of his Venetian culture with the study of the ancient sculpture and Michelangelo’s. The length of his Roman period has not been specified, but in general, historians tend to think that before his arrival to Spain, he worked again in Venice.

In 1577, El Greco is recorded in Toledo, where he died. His reasons for doing this journey are not known for sure. Maybe, one of the reasons was his lack of success in Italy and the hope of being commissioned the decoration of El Escorial by Philip II. It is supposed that in Rome he met Luís de Castilla, whose brother was Diego, who was the dean of the Cathedral of Toledo and was the one in charge of the rebuilding of the church of Santo Domingo el Antiguo.

Once he settled in Toledo, El Greco established himself as the most eminent and in demand painter of the city. Among lot of important works he was commissioned, outstands his work The Burial of the Count of Orgaz.

El Greco’s style was not influenced by any other artist during his period in Spain. The path of his style is a reserved evolution about the pictorial culture, which was acquired before arriving to Toledo. The course of his style is in a process of opting for the expression, of more unreal and unreal and flaming mystic exaltation, which lengthens and frays forms, contracts and expands the space and makes the colours to crackle.

With El Greco, the European Mannerism attained its last and most sublime expression in the art of painting.

Critics had not been able to value sufficiently his artistic personality until the twentieth century. The praises, which were sometimes too intense, we can find in the bibliography of the previous period are focused in the portraits and in the most calmed and Venetian aspects of his painting. On the other hand, the most differentiated characteristics and his superb visionary climbing were interpreted commonly as extravagance or even as madness. Only at the end of the nineteenth century, critics started to enter a phase of understanding of the greatness of this artist.