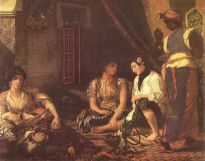 women of algiers in their rooms, 1834 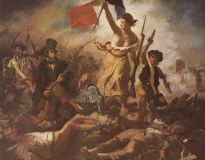 liberty leading the people on the barricades (sketch) 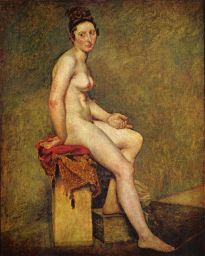 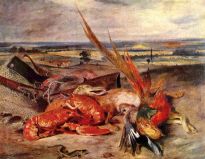 The French painter Ferdinand-Victor-Eugène Delacroix is undoubtedly the best painter of the Romantic Movement in France. According to some historians, Delacroix was in reality Talleyrand’s illegitimate son.

Due to his early vocation, he entered the École des Beaux-Arts when he was eighteen, he entered in P. Guérin’s studio, and he was disciple of...

See everything we offer you!
Eugene Delacroix

The French painter Ferdinand-Victor-Eugène Delacroix is undoubtedly the best painter of the Romantic Movement in France. According to some historians, Delacroix was in reality Talleyrand’s illegitimate son.

Due to his early vocation, he entered the École des Beaux-Arts when he was eighteen, he entered in P. Guérin’s studio, and he was disciple of David and keeper of the neoclassical ways of painting. In the École des Beaux-Arts he met Géricault and Raymound Soulier, who introduced him to the watercolour. Delacroix’s interest in painting animals maybe was caused by the influence Géricault had on him. Initially, he copied Géricault’s artworks as well as Rubens’ and Goya’s, whom he admired to the same way he admired to Constable and Veronés.

His first important composition was Dante and Virgil in Hell (Louvre Museum) that was exhibited in the Salon of 1822 and purchased by the state. Nevertheless, Scenes from the Massacres of Chios (Salon of 1824) was attacked harshly because of the obvious influence of the British painting, which meant the giving up of the traditional French Catholicism.

During some months of 1825, he lived in London, where he reinforced his friendship with Bonington and met Mrs. Dalton, who played a very important role in Delacroix’s love life. In London he experienced the charm of the British soft colours, the abundance of the aesthetic medieval motifs, and the influx of the British literature especially from Shakespeare, Byron and Scout. It was also there where he began to be an enthusiast of the watercolours. Being very young, he became the leading painter in the pictorial Romantic Movement. He studied the Venetian, Spanish, and Flemish painters, the anatomy of the animals, the Persian miniatures and the medieval lightings.

In 1828 he sent to the Salon his work Death of Sardanapalus (Louvre Museum), which was as attacked as Scenes from the Massacres of Chios. His most popular painting, Liberty Leading the People, earned him the Cross of the Legion of Honour. In 1832, he visited Morocco and Andalusia as part of a diplomatic mission. This journey enriched his repertory of painting subjects with scenes of the Arab and Jewish life, researches on animals, hunting, weapons, clothing, etc. He made use of all these subjects to paint exotic gender scenes and to illustrate Byron’s work as well as to paint his allusions to the Greek-Turkish conflict (The Greek War of Independence): The Women of Algiers (Louvre Museum), Jewish Wedding in Morocco, Jewish Musicians in Essaouira, The Sultan of Morocco and his Entourage and Greece on the Ruins of Missolonghi.

In 1830, thanks to Thiers’ protection, Delacroix was ordered several official works, in which Ingres, who was his deep-rooted opponent, had failed: the decoration of the king’s hall in the Chamber of Deputies (Palais Bourbon) in Paris, the libraries in the Chamber of Deputies and in the Senate building, the roof in the Salon of Peace in the town hall of Paris and the ceiling in the Gallerie d’Apollon of the Louvre among other works.

In 1838, Delacroix visited the Netherlands and in 1840 he exhibited The Justice of Trajan (Musée des Beaux-Arts de Rouen) and in the following year Entry of the Crusaders in Constantinople (Louvre Museum) in the Salon. He participated in the Salon during different years with artworks such as The Sultan of Morocco Moulay Abd-Er-Rahman Leaving his Palace at Meknes (1845), Comedians or Arabic Buffoons (1848), Othello and Desdemona (1849), and Lion Hunt (1854). He alternated this kind of artworks with paintings of flowers, still lives and landscapes as well as with self-portraits and portraits of Chopin, George Sand, etc.

In the exhibition of 1855 he achieved his deserved success. In 1857 he was admitted in the Académie des Beaux-Arts. According to Delacroix, he wanted to combine Michelangelo with Velázquez, and this is the reason why in his painting he was able to balance the traditional classical and the romantic as the subject matter and the exaltation of personality. On the other hand, he was an excellent theorist; whose critical spirit, talent and justice in terms of expression were expressed in his diary. His diary was sprinkled with considerable remarks.